I really did it this time.

I really did it this time.   Last week I decided to try to finish an old screwed up painting that was in the studio.   Right now, I have about 15 unfinished paintings hanging around the house.   Most of them have potential but still need more work to complete.  Some of them are hanging behind my easel. 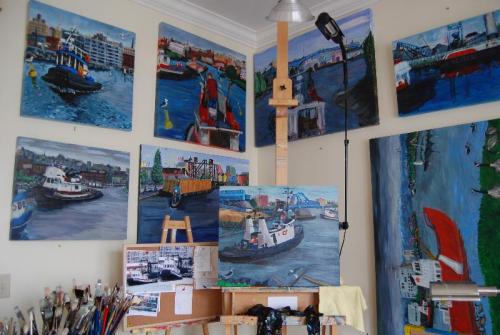 As it turned out this wasn’t such a good idea to try and return to an old painting.   I remember a while back reading in Emily Carr’s journal about when she was trying to paint a mountain and she couldn’t get that mountain to come alive.  She ended up working on it for days or maybe it was weeks only to have it fail in the end.   She became frustrated over the whole process.

Well this is exactly what has happened to me before and now it has happened to me again.   I’ve just spent the last four days trying to finish this blasted painting in the image below.   It appears to have gone further south than when I left off last year sometime.   Emily gesso’d over her mountain.  I am wondering if it is better for me to white this painting out too, just like Emily did. 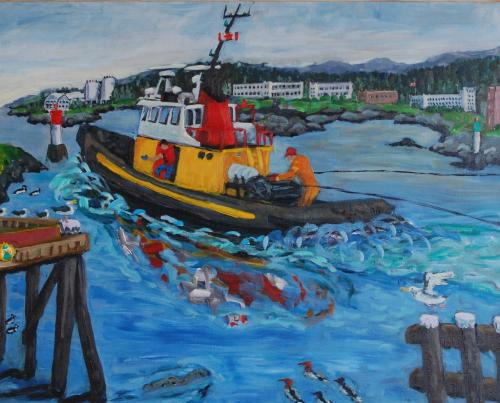 What the heck happened to the back  of the Evco Spray tug.   I guess I could call it a short box stern.   Like a short box pick-up truck.  It’s not good enough to exhibit but I thought it was close enough finish off. Now I don’t know what to do.

I guess the question is when you put down an unfinished piece, is it possible to come back after the inspiration for the idea long gone?    When I return I am not the same person experiencing the same insights as when I first started the piece.

Maybe if I was more of a technique type painter it would be different but I am a touchy feely type artist.

Here’s a few pieces that I’ve put down but seem close to being done. (the color and angles are off on some) 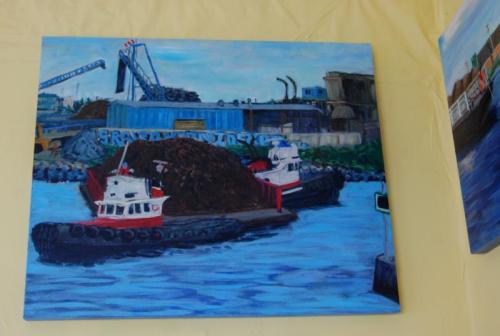 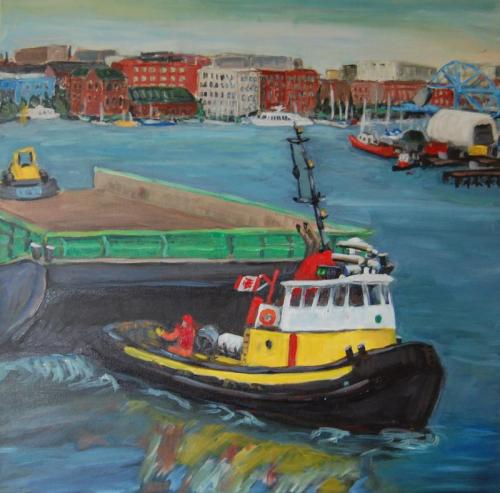 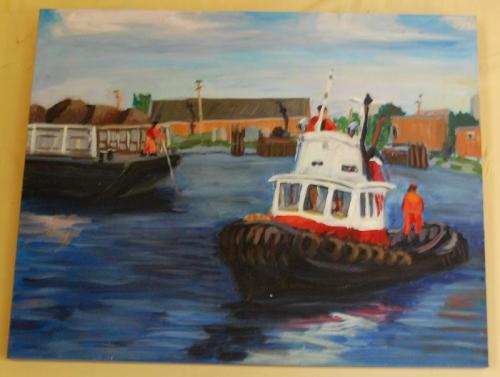 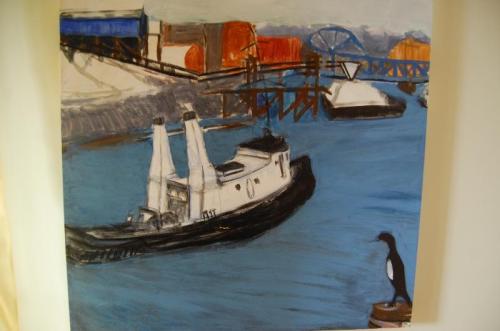 I don’t do a lot of technical prep work before I start a painting.   I see something, I feel something, and I paint something.   Simple as that, I stick out my tongue, I grab a brush and I get to work.  I think this approach is my greatest problem.  Maybe I need to focus more on the analytical mumble jumble before I start to paint.   Then just maybe I would have less unfinished work on my studio walls.

What do I now do with all these great but not finished paintings I have in the studio?  I really don’t like having all this incomplete work lying around and I would really like to overcome this issue.  What do other artists do in this situation? 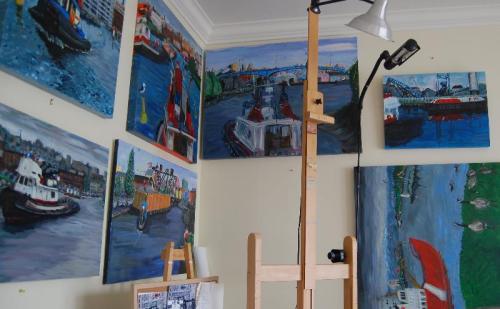 I really did it this time trying to fix that painting of the Evco Spray.   I think I should just white it out and start again.  I’ll let it go for now .   It is time to pick up my brushes  I am going to get back to finishing the painting of the Foam which I had started last week before it is darn well too late.

Pulling up my Socks

Hi everybody,   I am sorry I couldn’t keep up with my Blog’s the past few weeks.   First off it was the nasty flu bug and then last Friday I had dental implant surgery.

I see by looking back in my sketchbook that the last time I was out in the van was January 28. I had gone out to Sidney and had stopped by the Fish market to do a fast sketch.   I just love that image of the blue and white fish store sitting there at the end of the wharf, grey seagulls flapping and fighting all over the place, black  cormorants perched on pilings  and the fish guys in their white overalls and bright yellow aprons.    It’s just the coolest place. 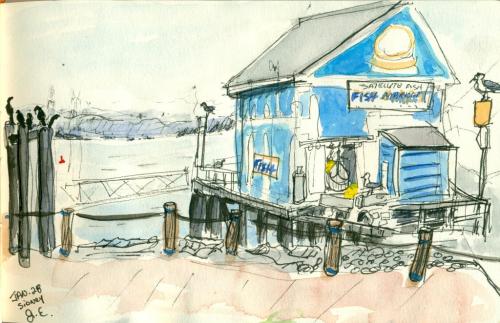 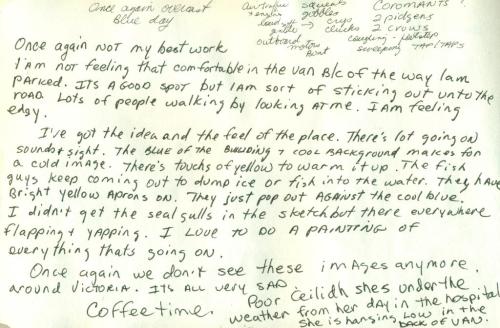 This morning I did a small painting from the sketch.   I used some gouache, watercolour, and ink.   It’s all new stuff for me.    I really like the gouache and I would like to spend more time fooling around with it.   I like the chalkiness of it plus it blends nicely – not like acrylic paint. 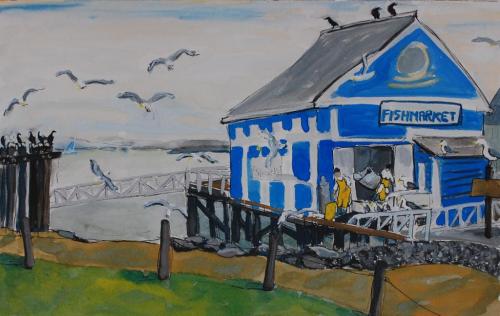 You know what!!  I just remembered I do have a little story to tell.   It happened last Wednesday when I had gone out early in the morning to do a harbour check and to pick up a cup of coffee.  But I think it should wait until I finish the painting of the Foam I started last week.   Of course the tugs Foam and the Cates XX are part of my story.  So until then……..   I am pulling up my socks and getting back at it.

The Foam in progress

I started this painting today.  It seems to have a life of its own and is different from my usuall style.   I’ll let you know how it turns out 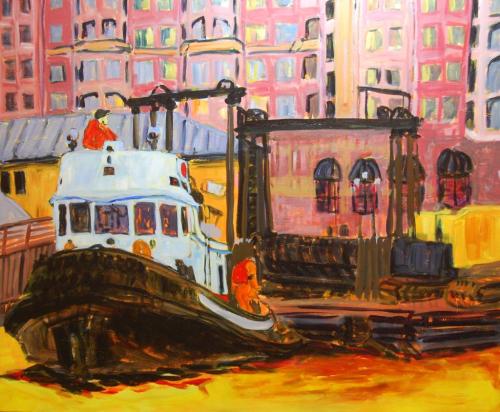 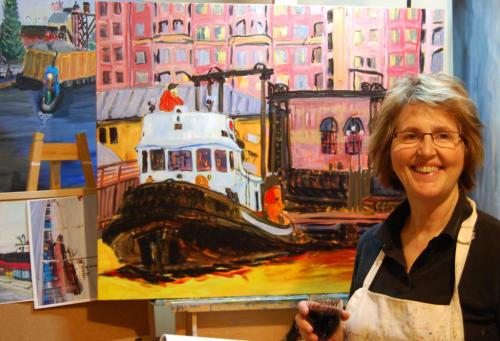 I wasn’t going to tell you guys but I just can’t help myself    I am laid up sick.

This week has been a nightmare.  I can’t sleep.  I toss and turn, cough and sweat.   My dear Ceilidh has refused to sleep at my feet preferring her own cold lonely bed.   Even the frigging cat won’t get into the covers with me.  You would think at least she would like the radiating heat of a feverish body.   I feel as if I’ve been dragged behind the Inlet Rover at full throttle with the cement barge bouncing off my head.   The worse part of all of this is I am missing out on what is happening around the harbour.   I have no idea what my boys are up too or if there are any new guys on in town.

As some of you know I have a chronic health condition.  It always seems to get in my way of getting things done and it certainly affects my art.     It feels like every time I get inspired and all fired up I get sick.   I’ll get half way through a good painting and then bang I am sick again.  Then I will quit working on it and  when I return later I’ve lost my inspiration for it.       I guess that saying “one step forward and two steps back” does ring true.   At least it rings true for me.

So since I am laid up I haven’t anything new to report.   I’ll scan a  sketch  for you.   I can’t write any more as I am climbing back into bed.  Whoa is me. Maybe tomorrow I will be able to get out and see what’s going on in the harbour. Here’s hoping.

I am thinking of all of you, 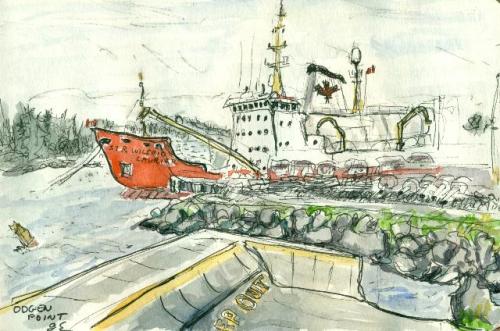 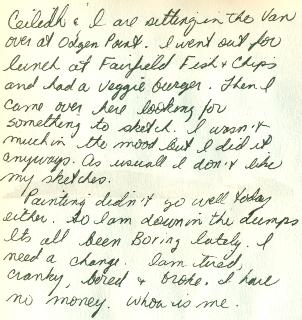